Media person Ma Dexing published an article commenting on the match between Shandong Luneng Taishan and Beijing Zhonghe Guoan. The article said: "When Luneng's goal is blown off, the game loses its competitive flavor." 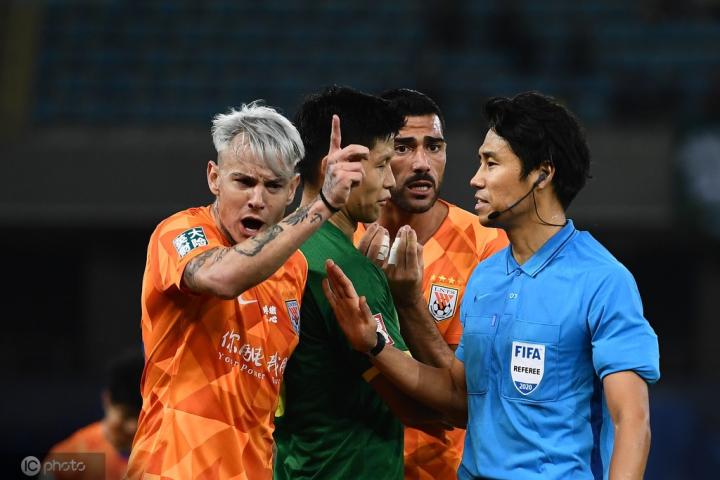 The article said: "Luneng and Guoan have made meticulous preparations for this game. For example, Luneng arranged for Moises and Guedes to play double forwards, and Kadar played at left back to prevent Wang Gang's impact. If the game develops normally, there may be overtime or even a penalty shootout, and it will be a high-quality game."

"However, Duan Liuyu's goal was blown, completely changing the trend of the game, and it would be meaningless to stick to technical and tactical issues. In the process of this goal, the referee did not think that Gerdes fouled, and neither did the assistant referee on the side. Think foul. This goal was actually done beautifully."

"However, there is a big problem with VAR's intervention at this time, because the function of VAR is only'assisting' rather than'leading'. Among the four VAR intervention situations, the first is to confirm whether a goal is effective. The starting point starts, such as whether there is a foul, whether there is an offside, whether the bottom line is reached during the operation, etc. The question of whether a foul is violated is completely defined and determined by the head referee."

"Secondly, the reason for the determination of Geddes's foul is that the reason is far-fetched because the ball was in Geddes's control at the time, and he took a kick first, passed the ball over the Guoan players, and then from the two Guoan players Passed through and started chasing the ball."

"In this process, it is normal if there is physical contact, and at this time, Gerdes’s attention is chasing the ball, not thinking about fouling or violating Guo’an players. If you choose a different video angle, you can It is clear that when Gerdes touched the ball, he had no physical contact with the Guoan players."

"VAR has repeatedly watched the replays to remind the referee that there is a suspected foul, which completely deviates from FIFA's original intention to introduce VAR."

"The most fundamental thing is that the referee determined that this'body contact' is a foul. If you don't blow fouls when you are in contact with other bodies in the game, there is obviously a problem of'different scales'. Therefore, Luneng raised this issue. Dissent, I'm afraid it couldn't be more normal."