Last night, in the focus of the Super League in the Suzhou Division, Beijing Guoan lost to Shanghai SIPG with a score of 0-1. Originally, in this game, the outside world and fans should focus on the performance and play of the players on the court. However, due to the multiple interventions of VAR during the game and Zhang Lei, known as the "Golden Whistle of the Super League", made several controversial penalties concerning goals, the focus was suddenly blurred. After the game, many domestic football reporters and media people spoke to Beijing Guoan. Among them, Beijing Guoan and team beauty reporter Pan Chong issued a three-point statement with fierce wording, asking Chen Xuyuan: You are the big hand behind the scenes. 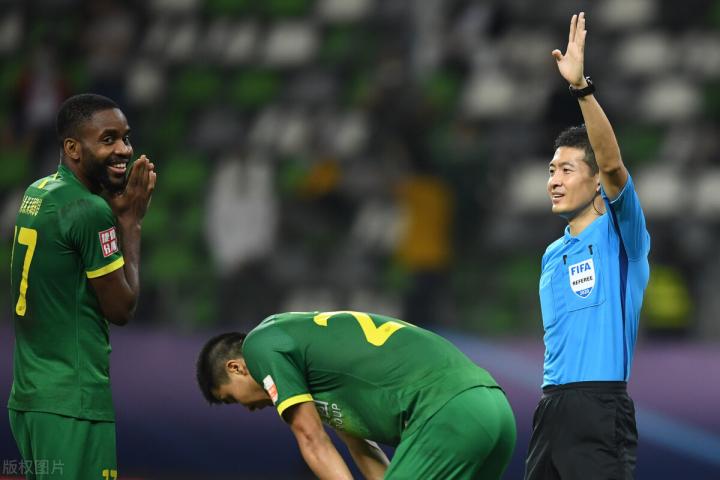 In this game, as two controversial penalties, one was when Vieira was brought down by Mu Yi in the penalty area of ​​Shanghai SIPG. Even if VAR intervened, the referee Zhang Lei went to the sidelines to watch the video replay and still did not award a penalty kick. However, the slow motion played back and forth through the live game screen showed that the moment Vieira received the ball within the penalty area was indeed brought to the ground by Muy. This should be an undisputed penalty. It's a pity that even when VAR was involved, Zhang Lei followed his colleague Fu Ming and acted as a blind eye.

The second controversial penalty was that between the second half of injury time and the 94th minute, Zhang Yuning's shot from a point outside the penalty area on the right side of the penalty area was reflected in the net after hitting Wang Ziming in the penalty area. Subsequently, the assistant referee on the sideline raised the flag to indicate that there was an offside situation. Immediately afterwards, VAR intervened again, and after communicating with the referee Zhang Lei through a headset, Zhang Lei came to the sidelines to watch the video playback and determined that Wang Ziming was offside. Judging from the line drawing of the live screen, Wang Ziming's refusal to offside is really a small matter. If you are an objective fan, you should zoom in on this picture of the line drawing and watch it later. It is indeed an offside of body hair, definitely not that of Wang Ziming's offside with one foot.

For these two controversial penalties concerning goals, Beijing Guoan lost 0-1 to Shanghai SIPG. In this regard, as the beauty and team reporter Pan Chong of PP Sports stationed in Beijing Guoan, he posted on his Weibo: The big hand behind the scenes: 1. You should not use Zhang Lei. He is a golden whistle, and blowing three serious misjudgments hurt him. At the same time, blowing the result at the level of a golden whistle is obvious, and it is not good for you. You should find a little-known referee, then everyone will think it is a matter of referee level. 2. Dealing with Guoan is very simple. Losing the ball after leading is widely criticized. You should not let the referee control Guoan’s goals, but let Guoan score three and be overtaken by SIPG, so that everyone will point the finger at it. The head coach of Guoan will not point to any other dirty things. 3. Your hand is very big, but be careful, what if there is a bigger hand? 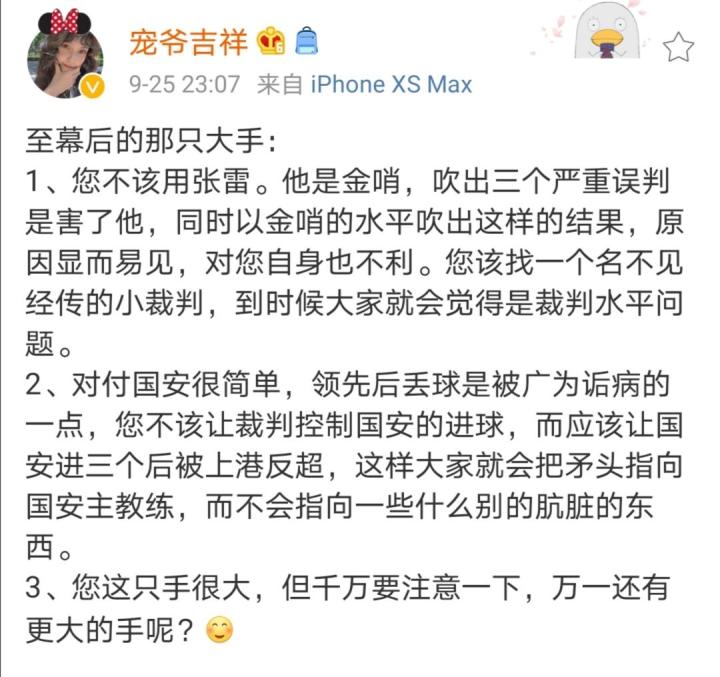 Although the beauty and team reporter did not directly name Chen Xuyuan, as long as it is a fan who understands the Super League and domestic football, it can be seen at a glance that the big hand behind the scenes that Pan Chong said is Chen Xuyuan. I don't know if it was out of anger, Pan Chong said these fierce words. In the author's opinion, this is not necessarily Chen Xuyuan deliberately, it is very likely that Zhang Leizhi and his like are flattering the leaders. Or maybe there is no behind-the-scenes situation at all. This is a subjective judgment made by Zhang Lei himself. This also reflects the overall level of Chinese football referees and matches Chinese football players. In any case, this night is bitter for the Beijing National Security Team and Guoan fans.