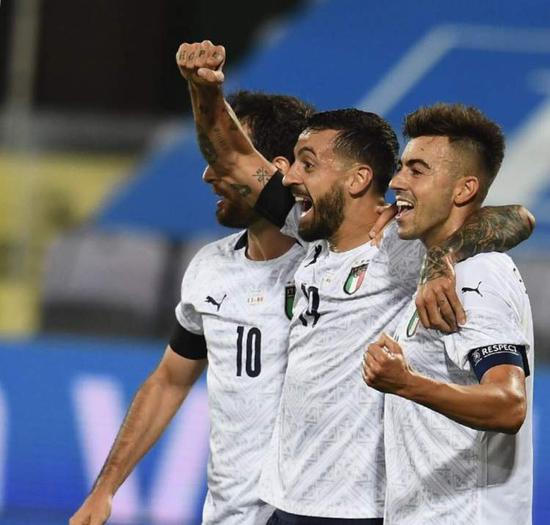 Early this morning, Beijing time, Salavi, who had not played for more than a month, made his debut in the friendly match between Italy and Moldova and scored two goals. Shalawi, who failed to play in Serie A on loan, also accepted an interview with the media for the first time after the game, saying that the failure of the transaction was not caused by salary issues.

Although in the UEFA Europa League last month, Salawi did not get a minute to play, nor did he make it into the roster, but the coach Mancini still included him in the Italian team's training list this month. The friendly match with Moldova early this morning was a warm-up for the upcoming two UEFA Europa League matches, and Shalawi got the chance to start.

Since leaving Shenhua at the end of August, Shalawi can only train alone most of the time, but he did well in this friendly match, scoring two goals. In the 30th minute, Berardi intercepted the ball in the frontcourt, Kristant picked a pass to the penalty area, and Shalawei shot from a small angle outside the instep. In the stoppage time of the first half, Locatelli made a long pass from the midfielder. Lazari picked the ball past the Moldovan goalkeeper Koselev, who abandoned the goal, and Shalawi rushed to the goal and scored the ball into the empty goal. In the 67th minute, Shalawi was replaced and rested.

After the game, Shalawi said, "This is so satisfying, so satisfying. It tells us that we have to wait for the opportunity and then be ready. I trained alone for a month, and now I enjoy this moment."

After leaving Shenhua, Shalawi has been looking for loan back to play in Europe. He was also very close to Rome at one time. However, when the Serie A transfer window opened and closed, his transfer was not reached. "I need to play. Because the Chinese Super League will not start the new season until February next year. Regarding the Roma team, I have always expressed to them that I am willing to join the team and can make concessions on the issue of salary, so the failure of the trade is another issue."

As for his future, Shalawi didn’t talk too much, “I only think about the national team now. I think the players have shown their own characteristics. This is a group of talented and enthusiastic players. We follow the instructions given to us by the coach, And the whole team is very positive."