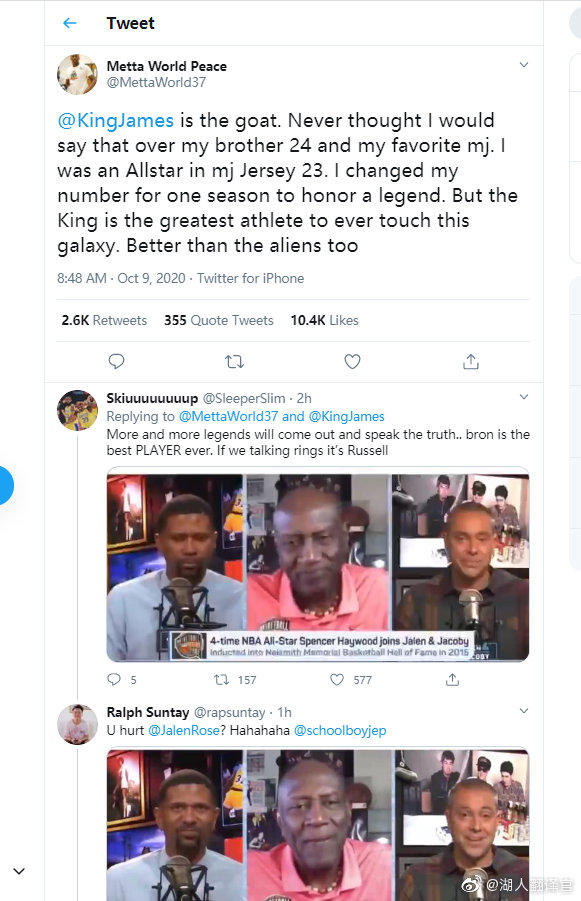 Beijing time on October 9th, the Los Angeles Lakers have achieved a 3-1 lead in the finals, it seems that the championship is very close to them. And LeBron James is also ahead of others in the voice of FMVP. If everything goes as he wants, 4 crowns + 4FMVP, the debate about James' historical status will once again set off a wave of climax.

Today, former Lakers champion Ci Shiping tweeted to express his respect for James: "James is GOAT (the best player in history). I never thought that I would be in my No. 24 brother and favorite Michael Jordan I said this behind my back. At the time I wore No. 23 to pay tribute to Jordan. At that time I was an All-Star. But James is the best X athlete in the entire galaxy. I feel he is stronger than the aliens."

When Ci Shiping was still called Artest, he followed the Lakers and Kobe to win the 2010 championship. In the finals ten years ago, he made the three that killed the game. The score is impressive. His personal relationship with Kobe is very good, but he has not been a teammate with James, the two have been facing each other on the court for many years.

In fact, Ci Shiping still has a say in the comparison of these three superstars. As a player, he has had many matchups with Jordan Kobe and James. He didn't mention the story of breaking Jordan's rib on the field. He also had a say with Jordan of the Wizards era. Played a few times on the court. What makes Ci Shiping even more proud is that he once restricted the scores of these three superstars to less than 20 points, which is really not easy. And being able to get the recognition of the former defensive master also confirms James' excellence from the side.